Be A Sauce Boss: Velouté 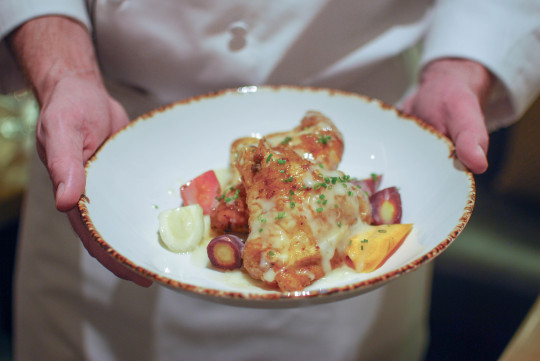 Chef Marc Suennemann of Trade Root at The Whitley shows us how to make velouté and whips up a fabulous chicken dish topped with this freshly made mother sauce.

Velouté (prounounced “vuh-loo-TAY”) is one of the five mother sauces of classical cuisine, which means it’s a starting point from which a number of sauces can be made, rather than a finished sauce itself. It’s sort of like a blank coloring book — you start with the lines and shapes and then color it in any way you choose.

Like béchamel, velouté is considered a white sauce, and both are thickened with roux. But whereas béchamel has milk as its base, velouté is made with stock.

And since there are three types of white stock — chicken, veal and fish — there are likewise three types of velouté. But chicken is the most common.
One of the sauces that’s derived from chickien velouté is called a suprême sauce, and it’s made by finishing a veloute with cream, butter, and lemon juice. Supreme sauce is known as a secondary mother sauce because it can be served itself or used as the basis for still other sauce recipes.

Heat the chicken stock to a simmer in a medium saucepan, then lower the heat so that the stock just stays hot.

Meanwhile, in a separate heavy-bottomed saucepan, melt the clarified butter over a medium heat until it becomes frothy. Take care not to let it turn brown.
With a wooden spoon, stir the flour into the melted butter a little bit at a time, until it is fully incorporated, giving you a pale-yellow-colored paste called a roux. Heat the roux for another few minutes or so, until it has turned a light blond color. This helps cook off the raw flour flavor. But since this is a white sauce, you don’t want to let the roux get too dark.

Using a wire whisk, slowly add the hot chicken stock to the roux, whisking vigorously to make sure it’s free of lumps.

Simmer for about 30 minutes or until the total volume has reduced by about one-third, stirring frequently to make sure the sauce doesn’t scorch at the bottom of the pan. Use a ladle to skim off any impurities that rise to the surface.

The resulting sauce should be smooth and velvety. If it’s too thick, whisk in a bit more hot stock until it’s just thick enough to coat the back of a spoon.
Remove the sauce from the heat. For an extra smooth consistency, carefully pour the sauce through a wire mesh strainer lined with a piece of cheesecloth.

Keep the velouté covered until you’re ready to use it.

Want to snag some Unsalted butter to make your own velouté? Go here!

We use cookies to ensure that we give you the best experience on our website. If you continue to use this site we will assume that you are happy with it.Ok