How Science Almost Killed the Art of Butter Making 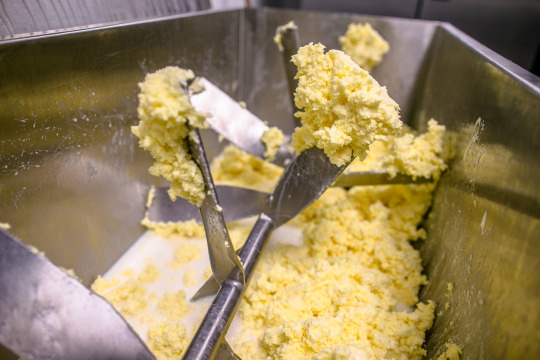 By Banner founder, Drew McBath. Originally seen in CRAFT by Under My Host.

The essence of butter making remained the same for thousands of years – milk from a (a cow, yak, buffalo, goat etc. that was close by) was separated into cream, by gravity or otherwise, and allowed to ferment over several days where the temperature was steady.  It’s likely that butter’s discovery, well over 5,000 years ago, probably in the Middle East or Africa, was the accident of a herder, who carried milk in an animal skin.

As Elaine Khosrova imagines in her book: Butter, A Rich History: “The shepherd sets out with his herd for a new pasture, harnessing the cool pouch of milk to one of his animals. Traversing the bumpy route, the milk is rocked back and forth, rhythmically, for more than an hour. At a cool temperature and slightly ripened by bacteria, the milk fat is in an ideal condition for churning. Before long the herdsman’s dairy load separates into thick butter flakes floating in an opaque liquid (buttermilk).“

I’ll leave you to imagine the astonishment and delight that struck the herder when he opened his animal skin and tasted that very first batch of cultured butter.

More modern churns, made of wood, ceramics or steel did essentially the same thing as the animal skin, agitating the heavy cream until it turned to butter. The butter maker then “worked” the butter in the churn or by hand to distribute remaining water droplets and to increase creaminess, smoothness and depth of taste. Salt was sometimes added during the churning process to delay rancidity.

The art of it all was in play for every batch. Temperatures, churning time and velocity and working intervals were all plied to account for changes in the seasons, the cows’ diets and viscosity and acidity of the cultured cream. Every butter maker had a signature that made their butter unique. The milk, which came from one or two farms, near the maker imparted a terroir to the butter that was distinct to where it was produced. Some butter makers used heirloom cultures to ripen their cream resulting in a taste completely distinctive taste. A small creamery in France was known for rubbing the inside of their wooden churn with a local plant before churning to deliver a particular flavor to their butter.

Somewhere along the way, these fundamentals, the art of the making, got lost in the quest for larger volumes, more speed and greater efficiencies. Beginning in the early and mid 20th century creameries begin to find ways to dramatically speed up the process, increase shelf life and reduce costs.  Wide spread use of pasteurization, cream separation and improvements in transportation started the revolution, making it easier to comingle milk from many different farms and effectively standardizing and commoditizing milk.

Then, in 1906 a Dairy School in Quebec proposed that butter makers remove the cream culturing step altogether, pointing out that it would improve consistency and lengthen shelf life. Large producers like the Land ‘O Lakes cooperative quickly replaced fermented butter production with the sweet cream variety. The butter flavor we all love, traditionally produced by slow-culturing the cream over 24 hours, was derived by adding a powder or liquid starter distillate to the already-churned butter. Today, big butter makers identify these flavor add-ins as “Natural Flavors” or “Lactic Acid” in their butter labels.

The modernization didn’t stop there. In the 1940s, continuous butter churns were invented to dramatically speed up production of butter. These monsters push out agitated, vacuumed (to remove “excess” oxygen) butter at the other end within minutes but short-cut old school working techniques that use cooling and resting intervals to improve taste, spreadability, and creaminess.

Today, virtually all the butter sold on grocery store shelves and in restaurants is made by butter making giants that have accomplished their mission of producing butter at low cost and high volume. Adjusted for inflation, butter was 33% cheaper per pound in 2012 than it was in 1900. A good thing in many respects but something was lost. If I could provide a similar index for taste, texture, and uniqueness of butter over the same timeframe, it would almost certainly show a similar decline.

Happily, there are still some small butter makers across the world laboring to make butter
the old fashioned, slow, simple way: carefully selecting high-quality milk, slow culturing in a vat to gently ripen the cream, slow churning and working in a small-batch churn for optimal consistency. The payoff is a unique deliciousness in every batch, a deeper, more complex taste, super high butterfat for better flavor delivery and a sublime creaminess that just can’t be had with mass production methods.  So…the next time you are thinking about butter, look for the smaller producers focused on the art of butter. You might just find yourself as astonished and delighted as that herder so many years ago.

Some smaller producers doing it the old fashioned way:

We use cookies to ensure that we give you the best experience on our website. If you continue to use this site we will assume that you are happy with it.Ok